Have you heard of them?

You have probably heard them mentioned but what are nurdles and bio-beads? Apart from being a beach cleaning nightmare, these small pellets are often mistaken for food by the varied wildlife and sea life that come across them. Up to 5mm in diameter, these tiny pellets enter our waterways due to industrial mistakes and have a long term effect on nature. Nurdle pollution is second only to the mess caused by microplastics, the tiny pieces of plastic that have broken down over time from larger items like drink bottles and other plastic waste. 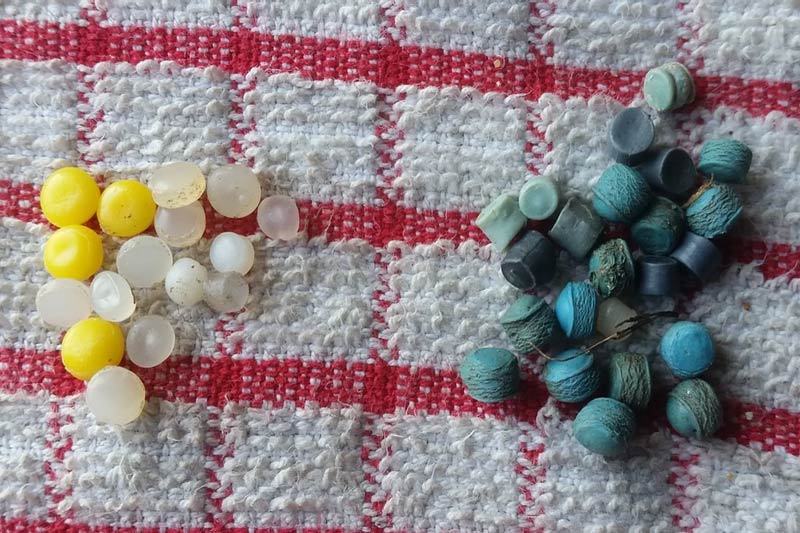 Nurdles on the left, Bio-beads on the right

Nurdles are the building blocks of plastics. These pre-production pellets are the raw material used in the manufacture of most things plastic. Predominantly made of either polyethylene or polypropylene, your plastic bags, bottles and much more besides, all started out as nurdles.

I’ve said it before, plastic itself isn’t the problem but the management of plastic is. Nurdles escape into the waterways due to accidents, negligence and a general lack of care about the environment. You’ll see them on every beach, riverbank and they have been found around lakes as well. The oil and gas industry aims to increase raw material plastic production by at least 33% by 2025. This presents a massive problem as an increase in production can only lead to an increase in spillage. The impact on wildlife can only get worse as spillages often make their way into our drains, which lead straight to the sea or rivers. This is how many other plastics make their way into the marine world as well.

Nurdles, by their very nature, are full of toxins. Not only do they start life with chemical additives such as carcinogens but once in our waterways, they absorb organic pollutants in high concentrations. Marine creatures then mistake them for food, the toxins can be absorbed into their bodies and this has massive implications further up the food chain. A study by Fidra (https://www.nurdlehunt.org.uk/) found that 95% of Fulmars studied in the North Sea, contained plastic. It is sad but true to say that we really are ruining our planet.

Over the years, containers with billions of beads have fallen off ships, trucks have spilt their loads and nurdle manufacturers have lost pellets onsite, washing them into the drainage systems. The end result is always the same; the natural world bears the brunt of our mistakes.

Nurdles are usually between 3 and 5mm in size, shaped like a lentil.

Similar to nurdles in size, bio-beads are used by water treatment companies to help clean up wastewater. Classed as a biological aerated flooded filter, or BAFF, Bio-beads are used in cells (also known as reactors) measuring approximately 9.5m x 9.5m. With each reactor holding around 5 billion beads, held down by a steel mesh with 3mm holes, the potential for disaster is obvious. Although BAFF plants are mainly used for smaller outputs, they could have up to 10 reactors in place. Simple maths easily work out how many bio-beads could be on site. During the early 1990s, water companies needed to overhaul their infrastructures to meet EU regulations. Many BAFF plants were set up as they took up less space, even though they were quite expensive to run.

As with any industry, mistakes happen and from time to time these beads escape and find their way into the natural world. Like nurdles, they get mistaken for food and are highly toxic. The job of a bio-bead is for a biofilm of bacteria to attach itself and digest the sewage waste, hence why they have a rougher surface than nurdles. This is to give more surface area for the bacteria. By the time the wastewater reaches the BAFF reactor, it will have been partially treated already by sedimentation – the removal of solids. What’s known as ‘biomass’ then attaches to the bio-beads as air is introduced into the base of the reactor, the oxygen assisting the attachment of the biomass. The aerated water is pushed up through the bio-beads and exits through the mesh into a drainage system that leads to a river, the sea, or is reused in other applications. Unfortunately, it has been known for the beads to join the treated water on its journey to the sea, where it ends up on our beaches or in the tummy of an animal or fish.

I wrote this article during the COVID-19 crisis, a time when everyone was being told to wash their hands thoroughly. If you find nurdles and bio-beads, pick them up and handle them, washing your hands is incredibly important.

Although these beads are similar to nurdles at first glance, a closer look will reveal a ridged or misshapen exterior, often a darker colour and a more cylindrical shape.

If you would like to help with nurdle studies, please visit

www.nurdlehunt.org.uk
Go to Top
0
0
Your Cart
Your cart is emptyReturn to Shop
Continue Shopping